Over the last couple of months I’ve been playing fantasy flight’s game X-wing miniatures which is cracking fun, however like all FF products it comes with LOTS of cardboard crack. So armed only with the freeware version of google sketch up, and some inspiration from other thingiverse designers, I’ve come up with the following token box to tame the card madness.

This prototype print works quite well but is a bit awkward to open, so I’ll make a couple more modifications before posting it back on thingiverse.

So I’ve been making terrain now for… okay lets say Many years… and it still surprises me how good something as simple as a two coat dry brush looks. Okay so it’s the addition of the spray texture that really sets off the drybrushing, but still you go instantly from flat black blob to all the detail really popping out. Anyhoo pictures so you can see what I mean…

So as were still waiting on our daughter turning up I guess I’ll try and get this add on ‘pack’ for the 6s2hit Necromunda terrain completed.

*phew* with two weeks left to go till Caroline’s due date just got this set finished in the nick of time ;) Anyhoo so i put another coat of just pva & bicarb paste over the snow patches then flocked with GW snow and tapped it smooth with a finger, this mostly seems to have solved the seep-age problem and the set is now delivered for use on an Urban Matz snow territory 6’x4′. But enough talk, pictures… 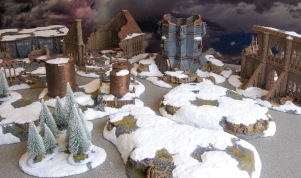 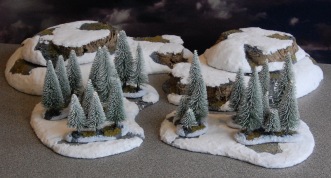 Stepped Hills & Trees, these generic pieces will be useful for other games systems 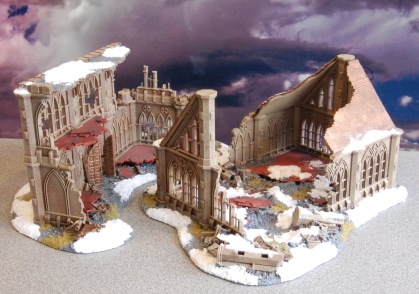 And pegasus buildings from the other side

And the open landing pad showing the internal storage that all the trees fit into ;) 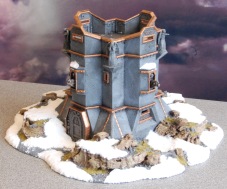 Bastion in a hill

Terrain set in its new home

Paint glorious paint… thuth I forgot how long it takes to base coat a terrain set, I spent 3hrs yesterday painting dark grey *snooze* anyhoo got a few more colours on this evening but it’s still looking pretty basic. But it’s a start and it’s worth noting that every terrain set goes through this dull looking part, it’s where you take it afterwards that makes people eyes pop ;) but here are I few in progress pics…

Hmm this ruin doesn’t look quite so busy now, winner :)

Bit of dry brushing has made those Aquila pop nicely but still need to find a striking colour for them.

Hmm bastion has blended in with the base a bit too much, will need to fix that. 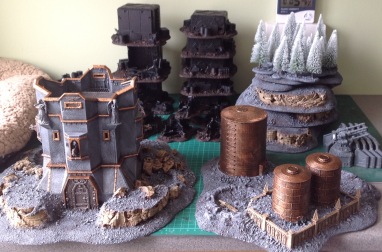 Painting finished stuff (ignore the necro terrain) unless anyone has suggestions? 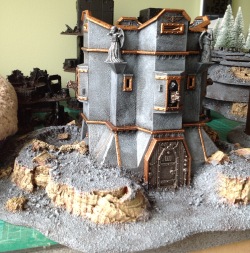 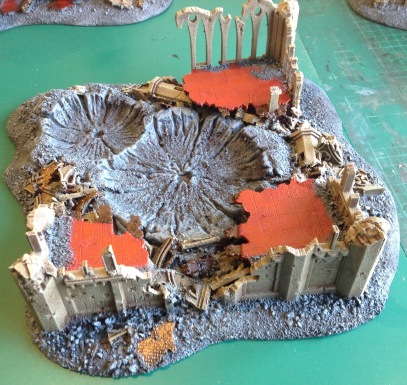 Arg bloody snow, made a pva/flock/water paste and it seems to have soaked up the basing paint in places :(

Owls & Squirrels… not at the same time!

So just back from our second Centre Parcs Boardgaming holiday and saw these little furry folks: 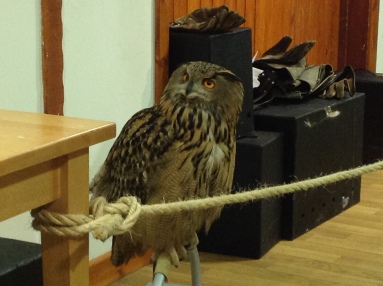 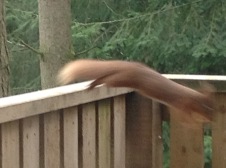 Go for the nuts! 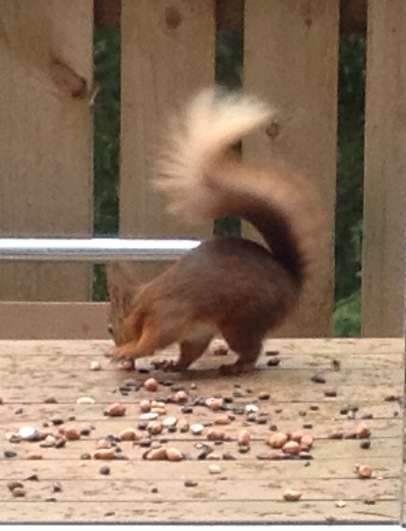 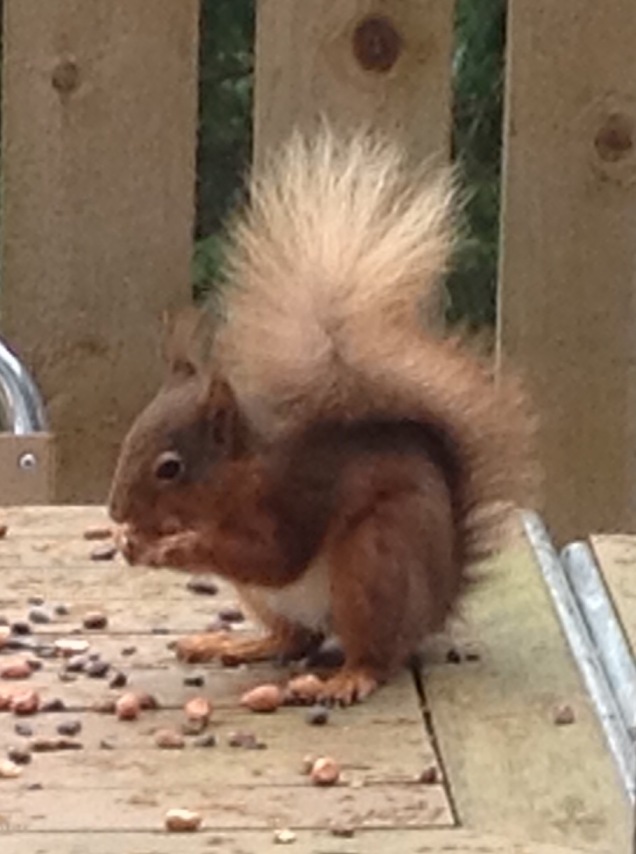 I’ve been using my day off today to get caught up with the spraying of this terrain set, after having a bit of an incident with overspray from the texturing earlier in the week (need to recoat the window sill, oops!) I decided to pickup a little spray booth with extractor and ho my does it do the job of sucking away all of the excess paint, and any smells. So if your wanting to spray large amounts mini’s or terrain indoors I would highly recommend one, also if you use an airbrush I also recommend ‘Vallejo – surface primer’. Anyhoo here are some slightly dull looking in progress pics: 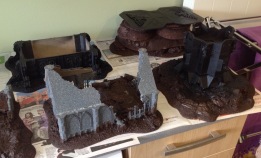 Buildings, the bottom left one still in its raw textured form waiting on another colour of primer to be delivered. 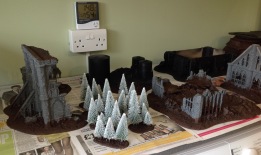 And the rest of the set…

And the extractor pipe sticking out the window

Okay so I managed to finish off the detailing this evening (hey space marine don’t blink, blink and your dead;) so onto the texturing, then hopefully get the textured spray and base coating done over the weekend *thuth* really hammering through this terrain set, but am quite happy with it so far. Anyhoo pictures, pictures…

Bastion now with added blast rubble & statues… hey did that one move :P

Maybe went a bit overboard with rubble on this one, but if so I should be able to hide some of it with texture or snow flock

The 3D printer really makes you come at terrain making from a different direction, previously I would have modded some rubble to finish the roof edge but the printer allowed me to make a custom edge trim instead

Mostly the same but with filler added

Again this building got overly loved with rubble, in this case though I think it works… hmm odd!

Bit of card texture to finish off the printed imp eagles 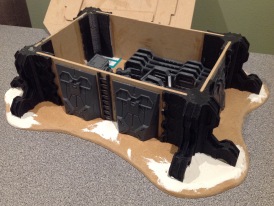 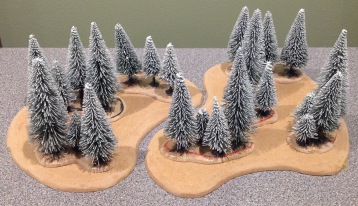 Wheeeeee :) sorry being childish, but its nice to get paid to do your hobby. So i recently got contacted about making some 40K terrain for a gent in Edinburgh; he has a few bits and bobs of terrain (GW – Bastion, Aegis defense lines, and four 3rd edition corner ruins) and plays Space Wolves so would like winter themed terrain. So after a bit of mulling i came up with this design sketch, and a price of £150 (quite cheap as i have a load of stuff in the cupboards i need to clear).

Yeah i know it’s not Picasso but it gets some idea’s down on paper allows me to visualise what i need to build. Doing a design sketch also allows me to get a balance of enough LOS block to Ruins & Scatter Terrain, which is important for a well rounded 40K terrain set.

Also this commission allowed me to pimp the new ‘mouse pad’ material gaming mats that seem to be going around at the moment. Having played x-wing miniatures on one of these i can definitely confirm that they are the future of wargaming as they are a great comprimise between a great visual look for your games and the convienience of a storable gaming surface: http://www.urbanmatz.com/p/193/snow-territory-6×4

Anyhoo so here are some work in progress pics of the terrain so far: 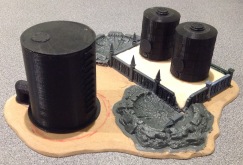 Landing platform with building corners designed & printed by me

And terrain within terrain storage area for later small pieces 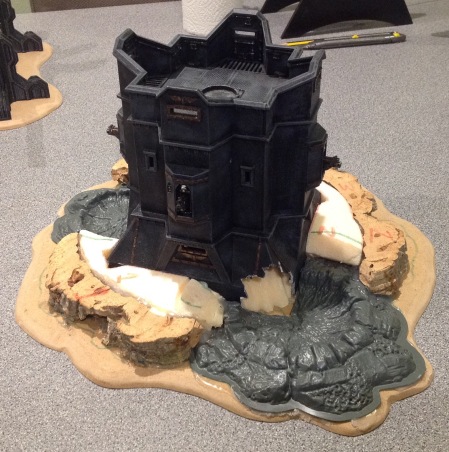 Bastion on a hill that’s taken a pounding

Bastion from above showing the roundness of the cork bark, the craters and the gap for the exit

Have now completed the rejigging, and with the exception of the pram & car seat this is now thoroughly my room ;)

And it wouldn’t properly be my room without a mess of hobby going on, so I’ve been using up some scraps to clear cupboard space (teehee I have cupboards) and have started making some scatter terrain to pad out the necromunda terrain I sent to 6s2hit.

So it’s going to be a dozen or so junk piles, some small buildings w. junk, and some piles of crates based on mini printed pallets.

Anyhoo hope these amuse, and hopefully I should get some photography soon to get decent pictures of the spare terrain I have around up on my new “For Sale” page.

Waiting for paint to dry in the hobby room has been driving me mental, so I hijacked the kitchen table and have been trying out my new 3D Printer.

Re-winding back for a minute, I’ve been waiting for 3D printers to come down to a reasonable price and they finally did (3D printer on Amazon) so £380 isn’t quite down to a cheap paper printer yet but there getting there, and it’s less than the few thousand when this technology was invented.

Anyhoo so done my first test print and watching it print really reminds me of the replicators in Star Trek that I watched as a teenager, but the detail even on this ‘cheap’ printer is remarkable. The print was of a bird inside a cage, but it’s just 28mm (1″) tall.

Wide shot of the cage 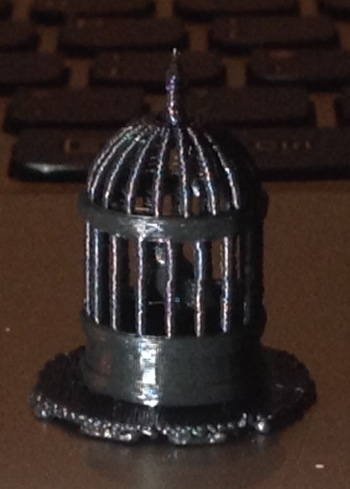 And the tiny bird inside